I have published four new essays on the Texas ScholarWorks platform.
These two are bundled under one heading:  Alternate cadences in recordings of "All the Things You Are" and "Embraceable You"

Some cadences in European and European-influenced tonal music show a contradiction in direction between registral stasis and linear movement, an example being alternative endings written into a song by Jerome Kern. The topic is explored through analysis of 51 recorded performances. In addition, a registrally complex cadence in Gershwin’s “Embraceable You” is surveyed through 44 recordings.

This essay supplements the Historical Survey Part 4b, which covered ascending cadence gestures in polkas between 1840 and 1861. Most items come from the Library of Congress collection Music for the Nation: American Sheet Music, ca. 1820 to 1860.

This essay continues from the Historical Survey Parts 4b & 4b2, which covered polkas between 1840 and 1861, to document ascending cadence gestures in more than fifty polkas after that, to c. 1890. Composers represented, among many others, are Gonzaga, Kéler, Johann Strauss, jr., Sullivan, and Ziehrer. An appendix discusses the Clarinet Polka and Modřanská Polka (“Beer Barrel Polka”).

Posted by David Neumeyer at 5:16 AM

Michael Buchler on "Take Me Out to the Ballgame."

SMT-V is the peer-reviewed video journal of the Society for Music Theory. In the newly released issue 7.4, Michael Buchler reveals the aspirational side to Tin Pan Alley in "I Don’t Care if I Never Get Back: Optimism and Ascent in 'Take Me Out to the Ball Game'.” Link to SMT-V.

The chorus of “Take Me Out To The Ball Game” (Von Tilzer and Norworth, 1908) is familiar to anyone who has attended baseball games in North America. However, relatively few people are aware that there is an introductory verse that poetically and contrapuntally motivates and anticipates the well-known chorus. This video article demonstrates some relationships between the verse and chorus and also challenges an earlier analysis that views this song through the lens of common-practice melodic norms.

In the film, Michael mentions statements I have made about rising and upper-register cadences as being common in 19th century operetta and its descendants in 20th century musicals. Here are some essays where I discuss that topic:

Addendum to the Historical Survey, with an Index. Section on Tin Pan Alley and Broadway. Link.

I have published Ascending Cadence Gestures, A New Historical Survey, Part 5d: After 1860 on the Texas ScholarWorks platform: link.

This is Part 5d of a multi-part essay gathering compositions with ascending lines and cadence gestures in European and European-influenced music. Composers include, among others, Chaminade, Benjamin Cutter, Edward German, Grieg, Kéler, Sousa, Tchaikovsky, and Waldteufel. Additional examples come from folk song and dance collections by Elizabeth Burchenal.

I have published Ascending Cadence Gestures, A New Historical Survey, Part 5b: Music from Hymnals, 1893-1909 on the Texas ScholarWorks platform: link.


Part 5b of this multi-part essay gathers compositions with ascending and upper-register cadence gestures in European and European-influenced music is given over to examples from Shaker and Mormon hymnals published in the United States between 1893 and 1909.

New publications: more on music to 1650 and an index

I have published Ascending Cadence Gestures, A New Historical Survey, Part 2f: to 1650, addendum 2 on the Texas ScholarWorks platform: link.


Part 2f of a multi-part essay gathers additional compositions with ascending and upper-register cadence gestures in European and European-influenced music before 1650. Compositions include instrumental and vocal music by Arcadelt, Banchieri, Cazzati, Hammerschmidt, Marenzio, Quagliati, and Rusca (among others), as well as music from volumes published by the houses of Gardano and Vincenti. The document is in three files, Parts 2f1, 2f2, and 2f3.

I have also published an updated index to Part 2: link.

Posted by David Neumeyer at 7:32 AM


This file updates the Index published in January 2019. There are two sections. The first is a progress report on the project Ascending Cadence Gestures, A New Historical Survey. The second is an updated list of all compositions with ascending or upper-register cadence gestures, as mentioned in my article "The Ascending Urlinie" (1987), in essays published on the Texas ScholarWorks platform, and in work files prepared for remaining numbers in the new historical survey.

Contrary to what one might expect, linear rising cadential figures are relatively rare in late 19th century marches and the closely related repertoires of the one-step and rag. Here are two examples from John Phillip Sousa.

In The Manhattan Beach March (1893), we are obliged to settle for an internal cadence (dominant ending for the first strain). 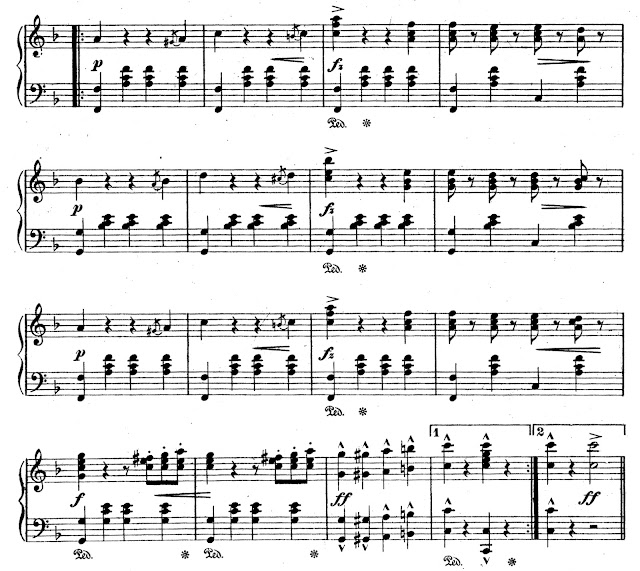 In Our Flirtation March (1880), an equally stark ascending line from ^5 to ^8 closes the second strain. I am quoting here from an early 20th century theater orchestra set of parts. In such circumstances, the violinist was considered the leader. In the second strain, the flute part duplicates the upper notes of the violin's octave, the first cornet and first clarinet the lower notes. 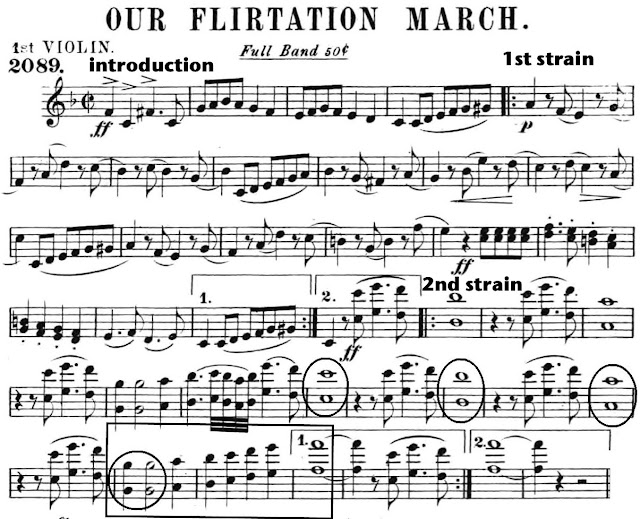 Combined with the melody, the circled notes would create what I call a "wedge," two voices approaching the final tonic from opposite directions. Historically, the more common version has a descending line above and a rising line below, but here Sousa does the opposite. We are obliged to imagine the final tonic note in the descending line ^5-^4-^3-^2- (^1). I have examined the full band score for this march and no part makes a ^2-^1 descent.
Posted by David Neumeyer at 3:30 AM

David Neumeyer
Co-author of Hearing the Movies: Music and Sound in Film History (Oxford University Press), second edition (2015). See "My Web Page" in the complete profile for my publications list.